Advertisements
Skip to content
In 1939 the British Government produced a poster intended to bolster the morale of their people in the event an invasion and re-entered popular culture in 2000 (Wikipedia, 2011). I love the color, design, and typography of this poster. 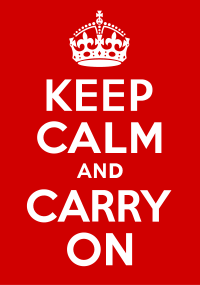 I find it interesting that the overall design of the Keep Calm and Carry On poster, aside for the absence of the color blue, appears very similar to the color and typography used in the campaign materials used by the Obama campaign in 2008 (Wikipedia, 2011).

I wonder if there is something inherent in the character/personality of the Gotham typeface that somehow is associated with hope and moving forward. As these two separate designs, to me, feel as if they cover a similar communication/territory for purpose and feel.

This past week, I saw the Keep Calm and Carry On poster again. Though, this time it was on the cover of a cute little book belonging to one of my associates at Michigan State University. The book (which was published by Ebury Press in 2009) contains short, inspirational quotes set in the same Gotham typeface that was used in the poster design. I may have to consider picking up a copy for myself in the near future.

Keep Calm and Carry On may be ordered from Amazon.com.

We are using cookies to give you the best experience on our website. You can find out more about which cookies we are using or switch them off in settings.

This website uses cookies so that we can provide you with the best user experience possible. Cookie information is stored in your browser and performs functions such as recognising you when you return to our website and helping our team to understand which sections of the website you find most interesting and useful.

Strictly Necessary Cookie should be enabled at all times so that we can save your preferences for cookie settings.

If you disable this cookie, we will not be able to save your preferences. This means that every time you visit this website you will need to enable or disable cookies again.